Most introductory tutorials on Gaussian processes start with a nose-punch of statements, like:

Alas, this is often confusing to the GP beginner; the following is the introductory tutorial on GPs that I wish I'd had myself.

By the end of this tutorial, you should understand:

Before moving within 500 nautical miles of the Gaussian process, we're going to start with something far easier: vanilla Gaussians themselves. This will help us to build intuition. We'll arrive at the GP before you realize.

So, how do we make those cool bell-shaped plots? A 2D plot is just a list of tuples— each with an x, and a corresponding y—shown visually.

As such, we lay out our x-axis, then compute the corresponding y—the density—for each. We'll choose an arbitrary mu and variance. 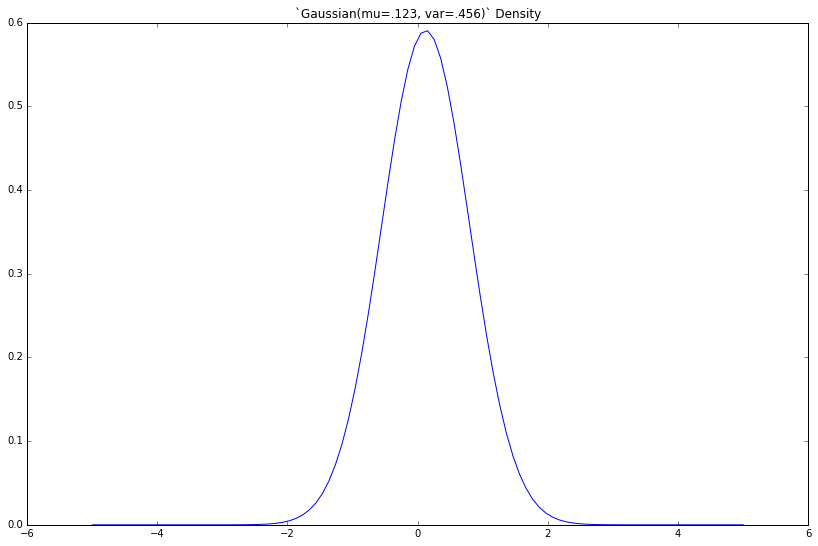 If we increase the variance var, what happens? 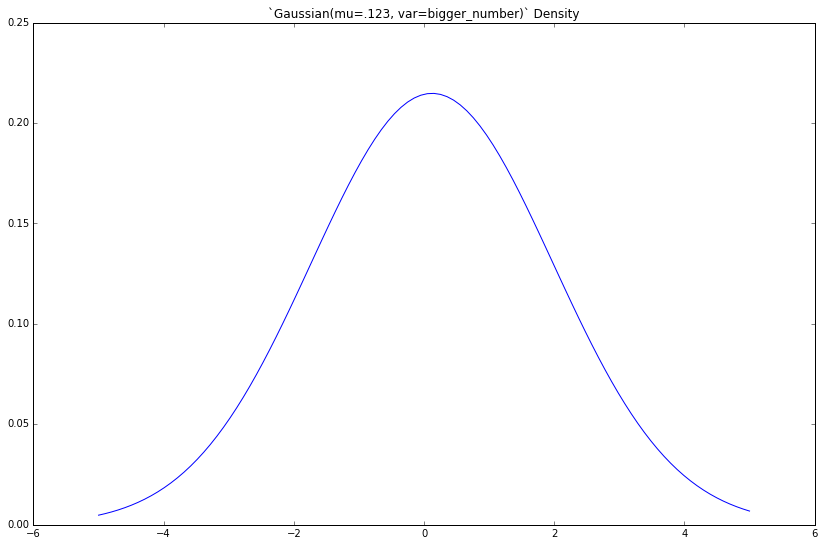 The density gets fatter. This should be familiar to you.

Similarly, we can draw samples from a Gaussian distribution, e.g. from the initial Gaussian(mu=.123, var=.456) above. Its corresponding density plot (also above) governs this procedure, where (x, y) tuples give the (unnormalized) probability y that a given sample will take the value x.

Let's add a method to our class, draw 500 samples, then plot their histogram. 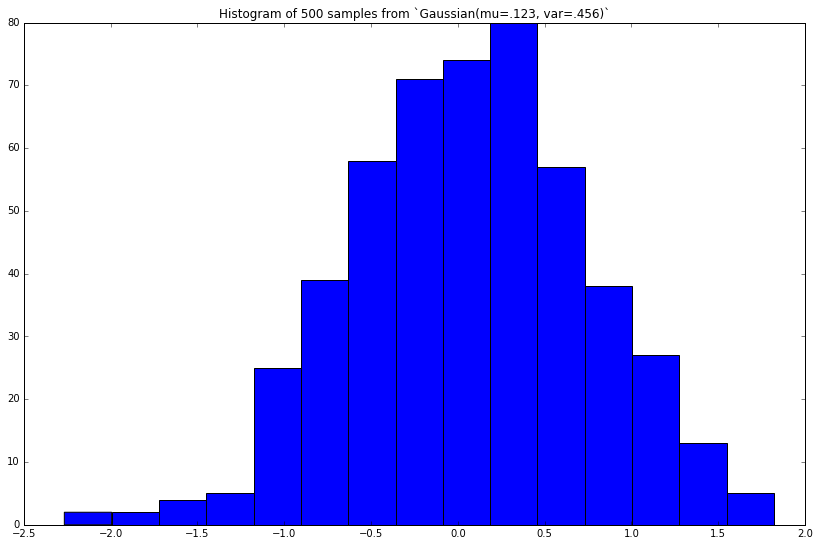 This looks similar to the true Gaussian(mu=.123, var=.456) density we plotted above. The more random samples we draw (then plot), the closer this histogram will approximate the true density.

We just drew samples from a 1-dimensional Gaussian, i.e. the sample itself was a single float. The parameter mu dictated the most-likely value for the sample to assume, and the variance var dictated how much these sample-values vary (hence the name variance).

In 2D, each sample will be a list of two numbers. mu will dictate the most-likely pair of values for the sample to assume, and a second parameter (yet unnamed) will dictate:

Given a 2D mu and 2x2 cov, we can draw samples from the 2D Gaussian. Here, we'll use NumPy. Inline, we comment on the expected shape of the samples. 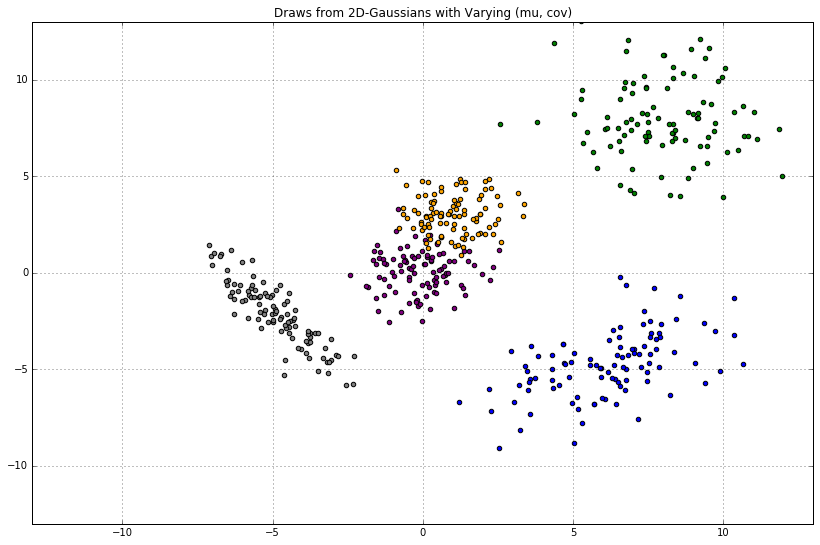 Gaussians are closed under linear maps

Each cloud of Gaussian dots tells us the following:

Let's assume \((x, y)\) is a vector named \(w\). Giving subscripts to the parameters of our Gaussian, we can rewrite the above as:

Next, imagine we have some matrix \(A\) of size 200x2. If \(w\) is distributed as above, how is \(Aw\) distributed? Gaussian algebra tells us the following:

Let's plot some draws from this distribution. Let's assume each row of \(A\) (of which there are 200, each containing 2 elements) is computed via the (arbitrary) function:

Each draw from our Gaussian will yield 200 y-values, each corresponding to its original x. In other words, it will yield 200 (x, y) tuples — which we can plot. 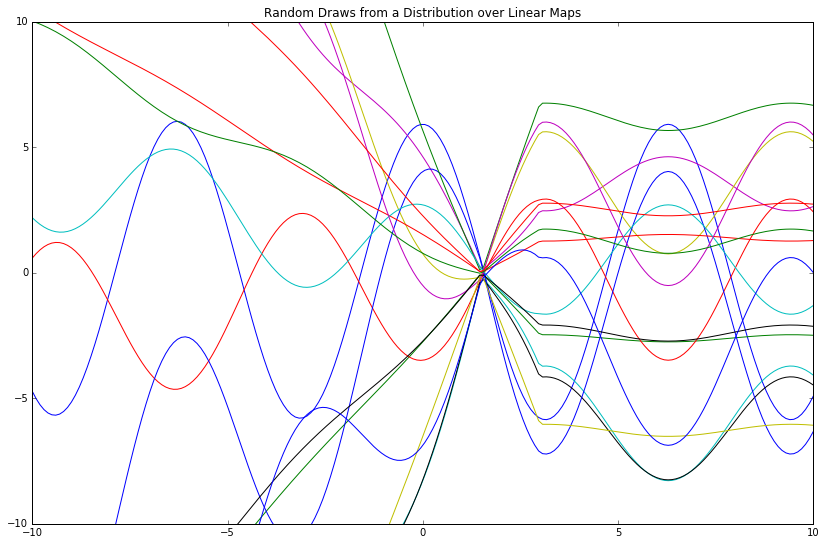 Notwithstanding, I find this phrasing to be confusing; to me, a "distribution over functions" sounds like some opaque object that spits out algebraic symbols via logic miles above my cognitive ceiling. As such, I instead think of this in more intuitive terms as a distribution over function evaluations, where a single function evaluation is a list of (x, y) tuples and nothing more.

Let's try some different "features" for our x-values then plot the same thing. 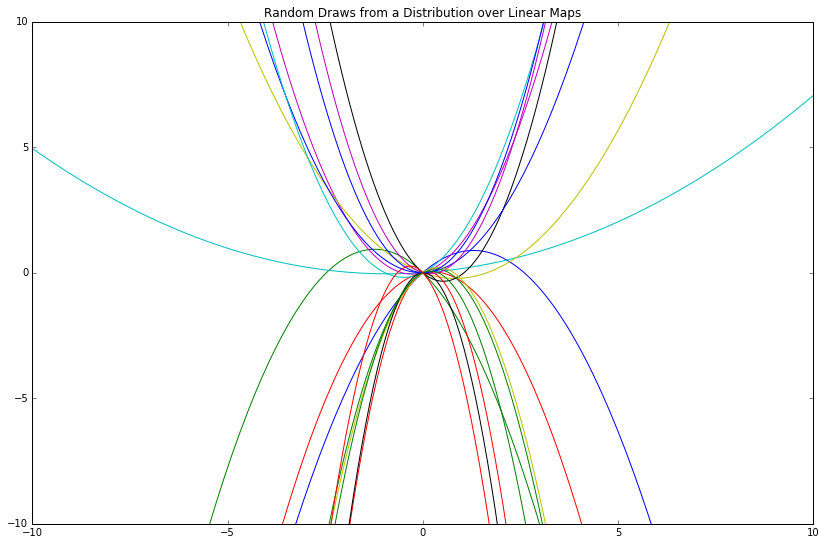 "The features we choose give a 'language' with which we can express a relationship between \(x\) and \(y\)."1 Some features are more expressive than others; some restrict us entirely from expressing certain relationships.

For further illustration, let's employ step functions as features and see what happens. 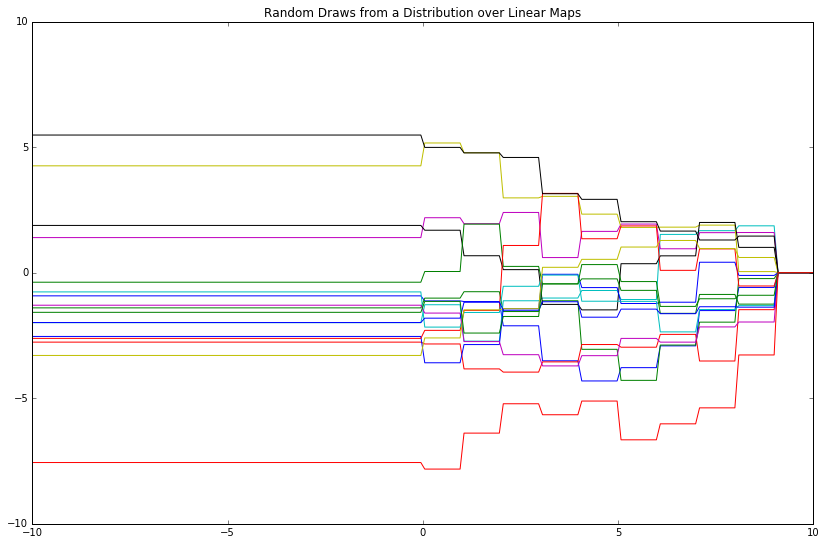 Gaussians are closed under conditioning and marginalization

Let's revisit the 2D Gaussians plotted above. They took the form

And now a bit more rigorously:

NB: In this case, all 4 "Sigmas" in the 2x2 covariance matrix are floats. If our covariance were bigger, say 31x31, then these 4 Sigmas would be matrices (with an aggregate size totaling 31x31).

\(y\) is a single element, so the resulting conditional will be a univariate distribution. To gain intuition, let's do this in a very crude manner: 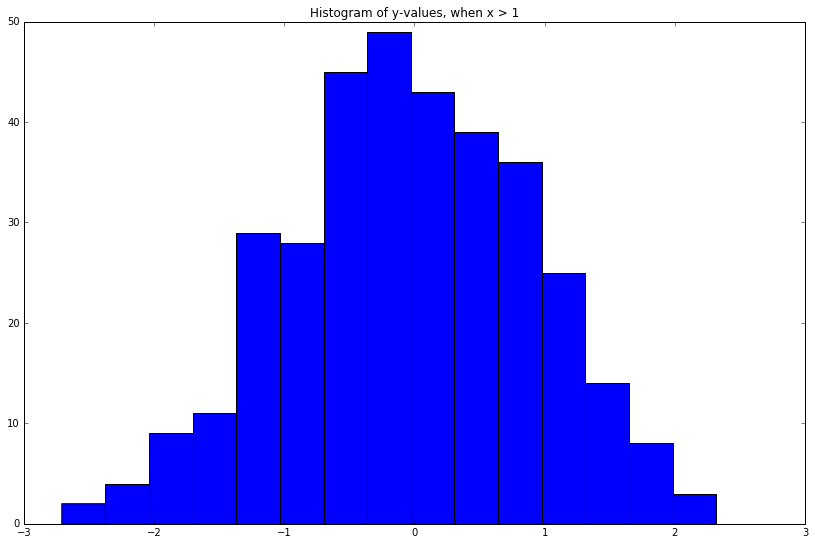 Instead, what if we wanted to know the functional form of the real density, \(P(y\vert x)\), instead of this empirical distribution of its samples? One of the axioms of conditional probability tells us that:

The right-most denominator can be written as:

Marginalizing a > 1D Gaussian over one of its elements yields another Gaussian: you just "pluck out" the elements you'd like to examine. In other words, Gaussians are closed under marginalization. "It's almost too easy to warrant a formula."1

Finally, we compute the conditional Gaussian of interest—a result well-documented by mathematicians long ago:

Conditioning a > 1D Gaussian on one (or more) of its elements yields another Gaussian. In other words, Gaussians are closed under conditioning.

Given some ground-truth samples from this distribution \(y = \phi(X)^Tw\), i.e. ground-truth "function evaluations," we'd like to infer the weights \(w\) most consistent with \(y\).

In machine learning, we equivalently say that given a model and some observed data (X_train, y_train), we'd like to compute/train/optimize the weights of said model.

Most precisely, our goal is to infer \(P(w\vert y)\) (where \(y\) are our observed function evaluations). To do this, we simply posit a joint distribution over both quantities:

Then compute the conditional via the formula above:

This formula gives the posterior distribution over our weights \(P(w\vert y)\) given the model and observed data tuples (x, y). 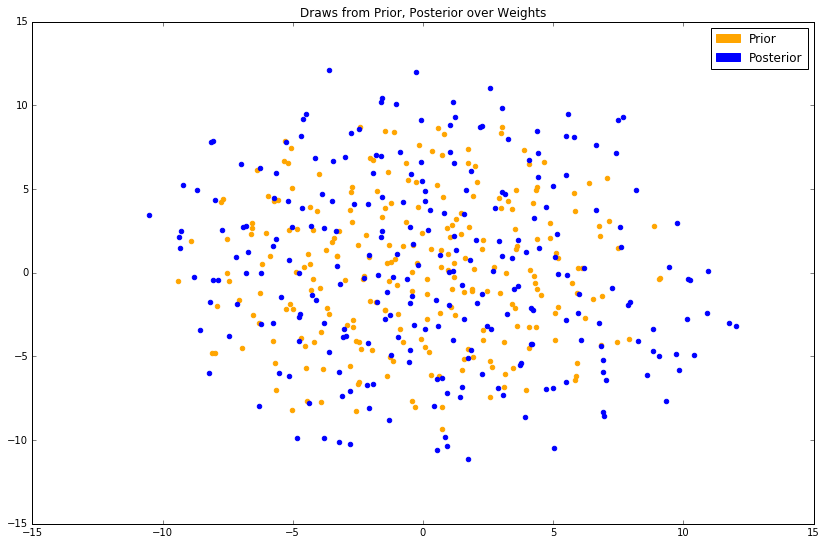 At best, we can see that the posterior has slightly larger values in its covariance matrix, evidenced by the fact that the blue cloud is more disperse than the orange, and has probably maintained a similar mean. The magnitude of change (read: a small one) is expected, as we've only conditioned on 6 ground-truth tuples.

Previously, we sampled function evaluations by centering a multivariate Gaussian on \(\phi(X)^T\mu_{w}\), where \(\mu_w\) was the mean of the prior distribution over weights. We'd now like to do the same thing, but use our posterior over weights instead. How does this work?

Well, Gaussians are closed under linear maps. So, we just follow the formula we had used above.

This gives us a posterior distribution over function evaluations.

In machine learning parlance, this is akin to: given some test data X_test, and a model whose weights were trained/optimized with respect to/conditioned on some observed ground-truth tuples (X_train, y_train), we'd like to generate predictions y_test, i.e. samples from the posterior over function evaluations.

The function to compute this posterior, i.e. compute the mean-vector and covariance matrix of this Gaussian, will appear both short and familiar.

To plot, we typically just plot the error bars, i.e. the space within (mu_y_post - var_y_post, mu_y_post + var_y_post) for each x, as well as the ground-truth tuples as big red dots. This gives nothing more than a picture of the mean-vector and covariance of our posterior. Optionally, we can plot samples from this posterior as well, as we did with our prior. 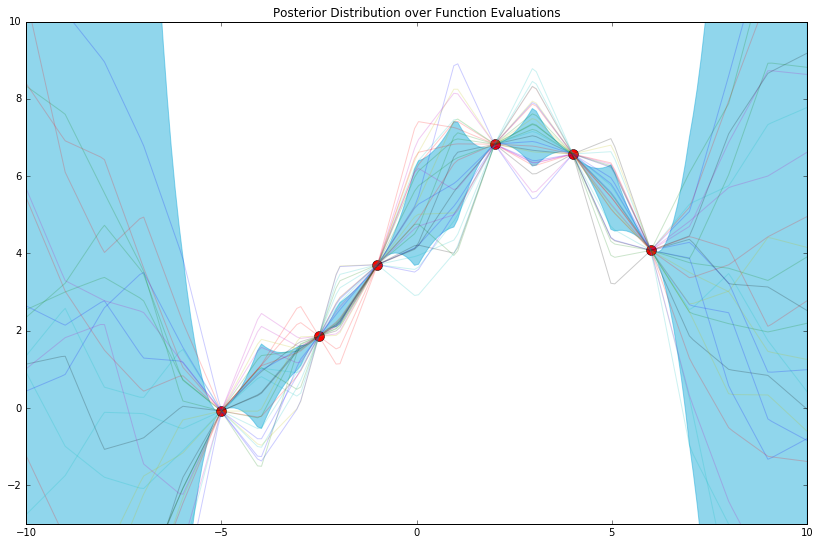 Finally, we stated before that the features we choose (i.e. our phi_func) give a "language" with which we can express the relationship between \(x\) and \(y\). Here, we've chosen a language with 20 words. What if we chose a different 20? 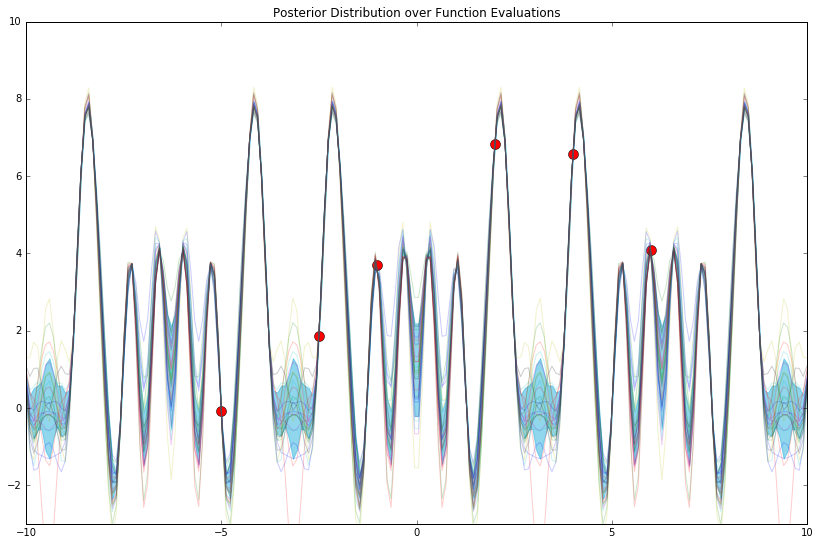 Not great. As a brief aside, how do we read the plot above? It's simply a function, a transformation, a lookup: given an \(x\), it tells us the corresponding expected value \(y\), and the variance around this estimate.

For instance, right around \(x = -3\), we can see that \(y\) is somewhere in \([-1, 1]\); given that we've only conditioned on 6 "training points," we're still quite unsure as to what the true answer is. To this effect, a GP (and other fully-Bayesian models) allows us to quantify this uncertainty judiciously. 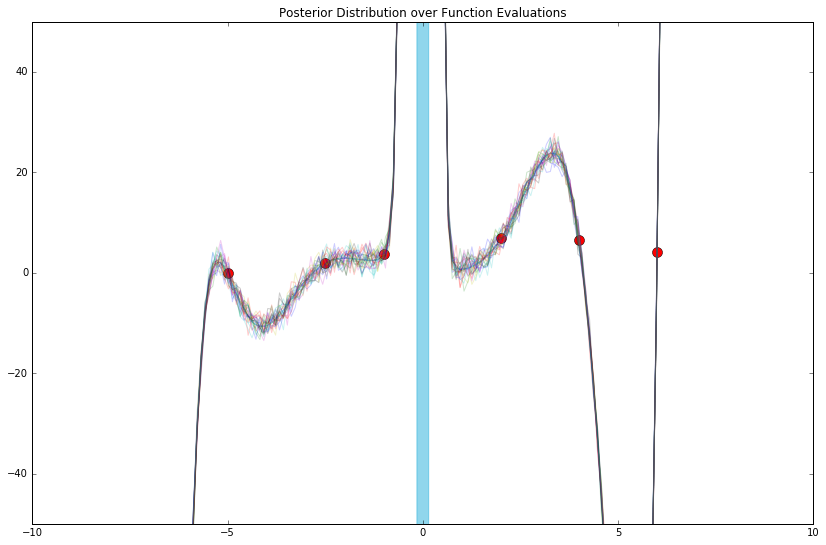 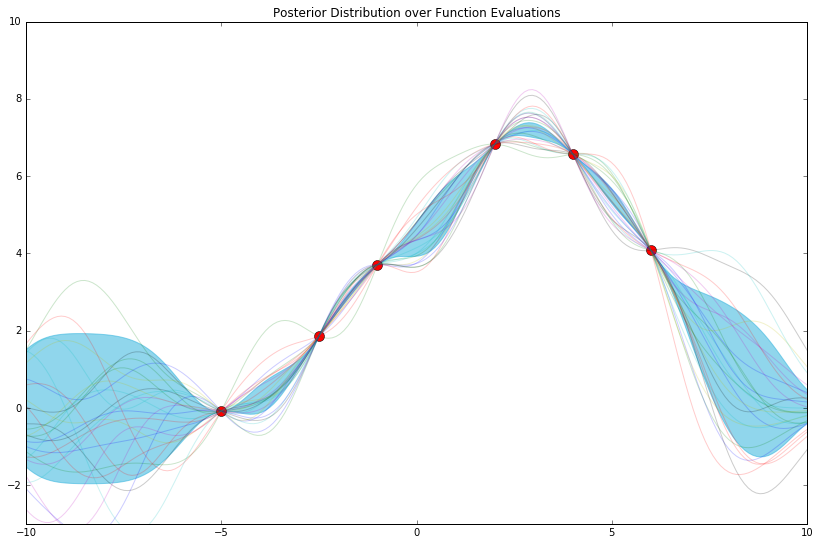 That last one might look familiar. Therein, the features we chose (still arbitrarily, really) are called "radial basis functions" (among other names).

We've loosely examined what happens when we change the language through which we articulate our model. Next, what if we changed the size of its vocabulary?

First, let's backtrack, and try 8 of these radial basis functions instead of 20. 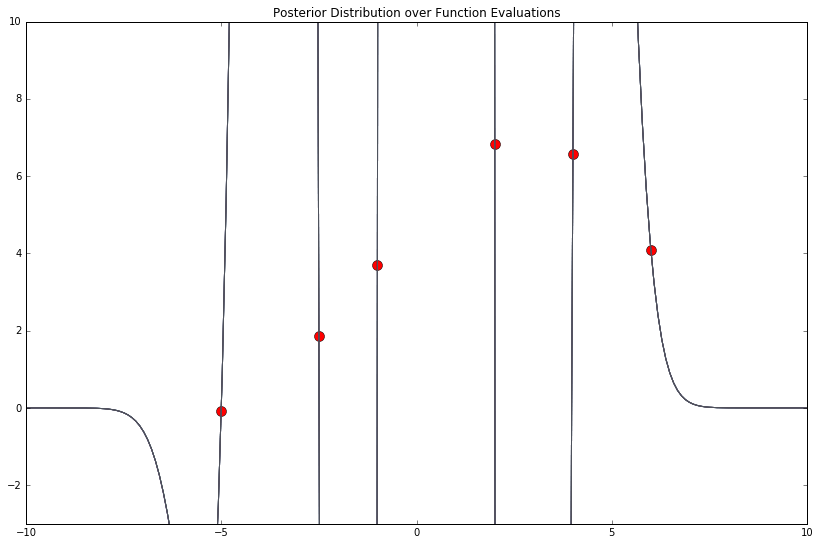 Very different! Holy overfit. What about 250? 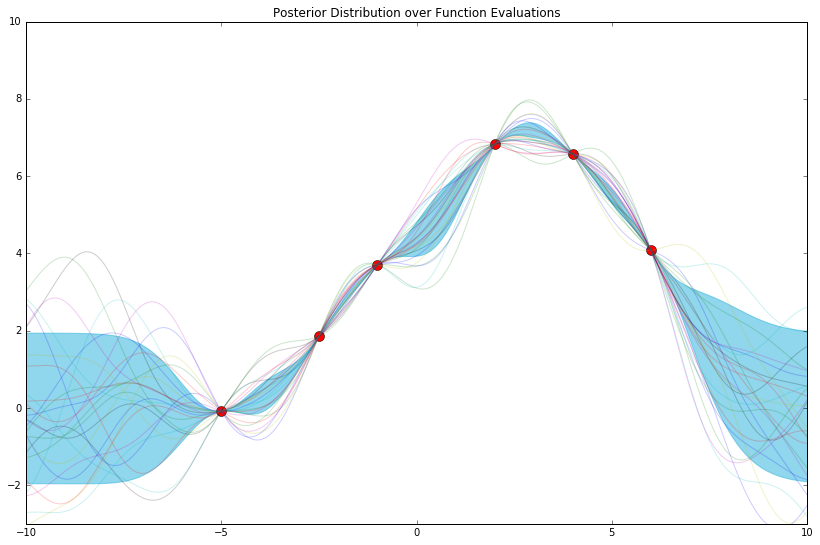 It appears that the more features we use, the more expressive, and/or less endemically prone to overfitting, our model becomes.

In this tutorial, we've arrived at the mechanical notion of a Gaussian process via simple Gaussian algebra.

Conversely, we did not yet cover (directly):

These will be the subject of the following post. Thanks for reading.