RescueTime is "a personal analytics service that shows you how you spend your time [on the computer], and provides tools to help you be more productive." Personally, I've been a RescueTime user since late-January 2016, and while it does ping me guilty for harking back to a dangling Facebook tab in Chrome, I haven't yet dug much into the data it's thus-far stored.

In short, I built a Shiny app that estimates my/your typical week with RescueTime. In long, the analysis is as follows.

In effect, we can view each row as an empirical probability distribution over the 5 levels at hand. As such, our goal is to infer the process that generated these samples in the first place. In the canonical case, this generative process would be a Dirichlet distribution — a thing that takes a vector \(\alpha\) and returns vectors of the length of \(\alpha\) containing values that sum to 1. With a Dirichlet model conditional on the RescueTime data observed, the world becomes ours: we can generate new samples (a "week" of RescueTime log!) ad infinitum, ask questions of these samples (e.g. "what percentage of the time can we expect to log more 'Very Productive Time' than 'Productive Time?'"), and get some proxy lens into the brain cells and body fibers that spend our typical week in front of the computer in the manner that they do.

To begin this analysis, I first download the data at the following link. If you're not logged in, you'll be first prompted to do so. To do the same, you must be a paying RescueTime user. If you're not, you're welcome to use my personal data in order to follow along.

The data at hand have 48 rows. First, let's see what they look like.

Next, let's see how each level is distributed: 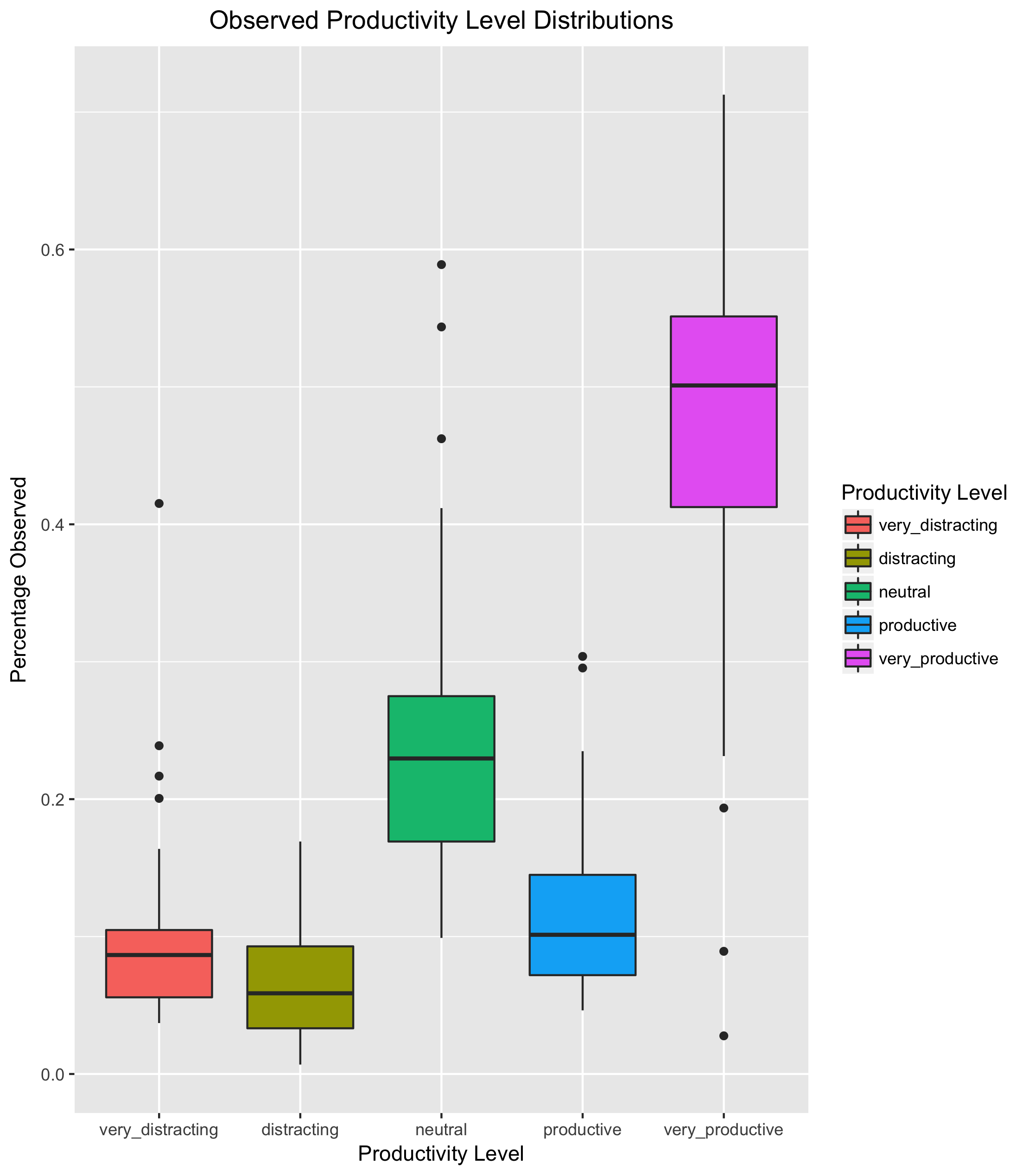 Finally, let's choose a modeling approach. Once more, I venture that each week should be viewed as a draw from a Dirichlet distribution; at the very least, no matter how modeled, each week (draw) is inarguably a vector of values that sum to 1. To this effect, I see a few possible approaches.

A Dirichlet Process (DP) is a model of a distribution over distributions. In our example, this would imply that each week's vector is drawn from one of several possible Dirichlet distributions, each one governing a fundamentally different type of week altogether. For example, let's posit that we have several different kinds of work weeks: a "lazy" week, a "fire-power-super-charged week," a "start-slow-finish-strong week," a "cram-all-the-things-on Friday week." Each week, we arrive to work on Monday morning and our aforementioned brain cells and body fibers "decide" what type of week we're going to have. Finally, we play out the week and observe the resulting vector. Of course, while two weeks might have the same type, the resulting vectors will likely be (at least) slightly different.

In this instance, given a Dirichlet Process \(DP(G_0, \alpha)\) — where \(G_0\) is the base distribution (from which the cells and fibers decide what type of week we'll have) and \(\alpha\) is some prior — we first draw a week-type distribution from the base, then draw our week-level probability vector from the result. As a bonus, a DP is able to infer an infinite number of week-type distributions from our data (as compared to K-Means, for example, in which we would have to specify this value a priori) which fits nicely with the problem at hand: à la base, how many distinct week-types do we truly have? How would we ever know?

Dirichlet Processes are best understood through one of several simple generative statistical processes, namely the Chinese Restaurant Process, Polya Urn Model or Stick-Breaking Process. Edwin Chen has an excellent post dissecting each and its relation to the DP itself.

Given that a Dirichlet distribution is an exponential model, "all members of the exponential family have conjugate priors"1 and our data can be intuitively viewed as Dirichlet draws, it would be fortuitous if there existed some nice algebraic conjugacy to make inference a breeze. We know how to use Beta-Binomial and Dirichlet-Multinomial, but unfortunately there doesn't seem to be much in the way of X-Dirichlet2. As such, this approach unfortunately dead-ends here.

The "Poor-Man's Dirichlet" via Linear Models

A final approach has us modeling the mean of each productivity-level proportion \(\mu_i\) as:

For each \(\phi_j\), we place a normal prior \(\phi_j \sim \text{Normal}(\mu_j, \sigma_j)\), and finally give the likelihood of each productivity-level proportion \(p_i\) as \(p_i \sim \text{Normal}(\mu_i, \sigma)\) as in the canonical Bayesian linear regression. There's two key points to make on this approach.

In the end, I chose Option 3 for a few simple reasons. First, I have no reason to believe that the data were generated by a variety of distinct "week-type" distributions; a week is a rather large unit of time. In addition, the spread of the empirical distributions don't appear, by no particularly rigorous measure, that erratic. Conversely, if this were instead day-level data, this argument would be much more plausible and the data would likely corroborate this point. Second, Gelman suggests this approach in response to a similar question, adding "I’ve personally never had much success with Dirichlets."2

To build this model, I elect to use Stan in R, defining it as follows:

Here (with a, b, c, d, e corresponding respectively to "Very Distracting Time," "Distracting Time," "Neutral," "Productive Time," "Very Productive Time") I model the likelihoods of all but e, as this can be computed deterministically from the posterior samples of a, b, c and d as \(e = 1 - a - b - c - d\). For priors, I place \(\text{Normal}(0, 1)\) priors on \(\phi_j\), the magnitude of which should be practically irrelevant as stated previously. Finally, I give \(\sigma\) a \(\text{Uniform}(0, 1)\) prior, which seemed like a logical magnitude for mapping a vector of values that sum to 1 to another vector of values that sum (to something close to) to 1.

Instinctually, this modeling framework seems like it might have a few leaks in the theoretical ceiling — especially with respect to my choices surrounding the shared \(\sigma\) parameter. Should you have some feedback on this approach, please do drop a line in the comments below.

To fit the model, I use the standard Stan NUTS engine to build 4 MCMC chains, following Richard McElreath's "four short chains to check, one long chain for inference!"3. The results — fortunately, quite smooth — are as follows: 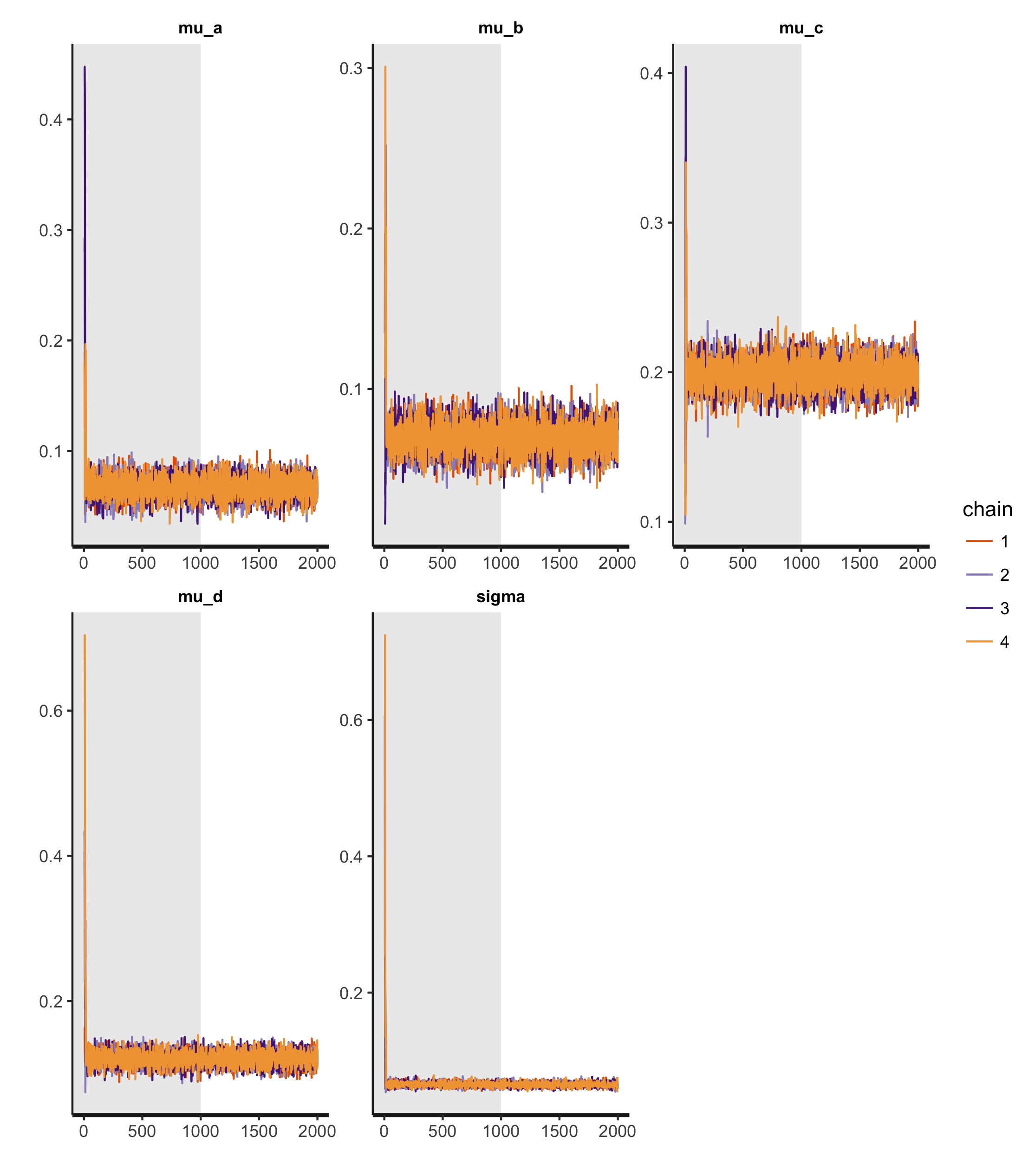 The gray area of the plot pertains to the warmup period, while the white gives the valid samples. All four chains appear highly-stationary, well-mixing and roughly identical. Finally, let's examine the convergence diagnostics themselves:

Both Rhat — a value which we hope to equal 1, would be "suspicious at 1.01 and catastrophic at 1.10"3 — and n_eff — which expresses the "effective" number of samples, i.e. the samples not discarded due to high autocorrelation in the NUTS process — are right where we want them to be. Furthermore, \(\sigma\) ends up being rather small, and with a rather-tight 97% prediction interval to boot.

Next, let's draw 2000 samples from the joint posterior and plot the respective distributions of \(\mu_i\) against one another: 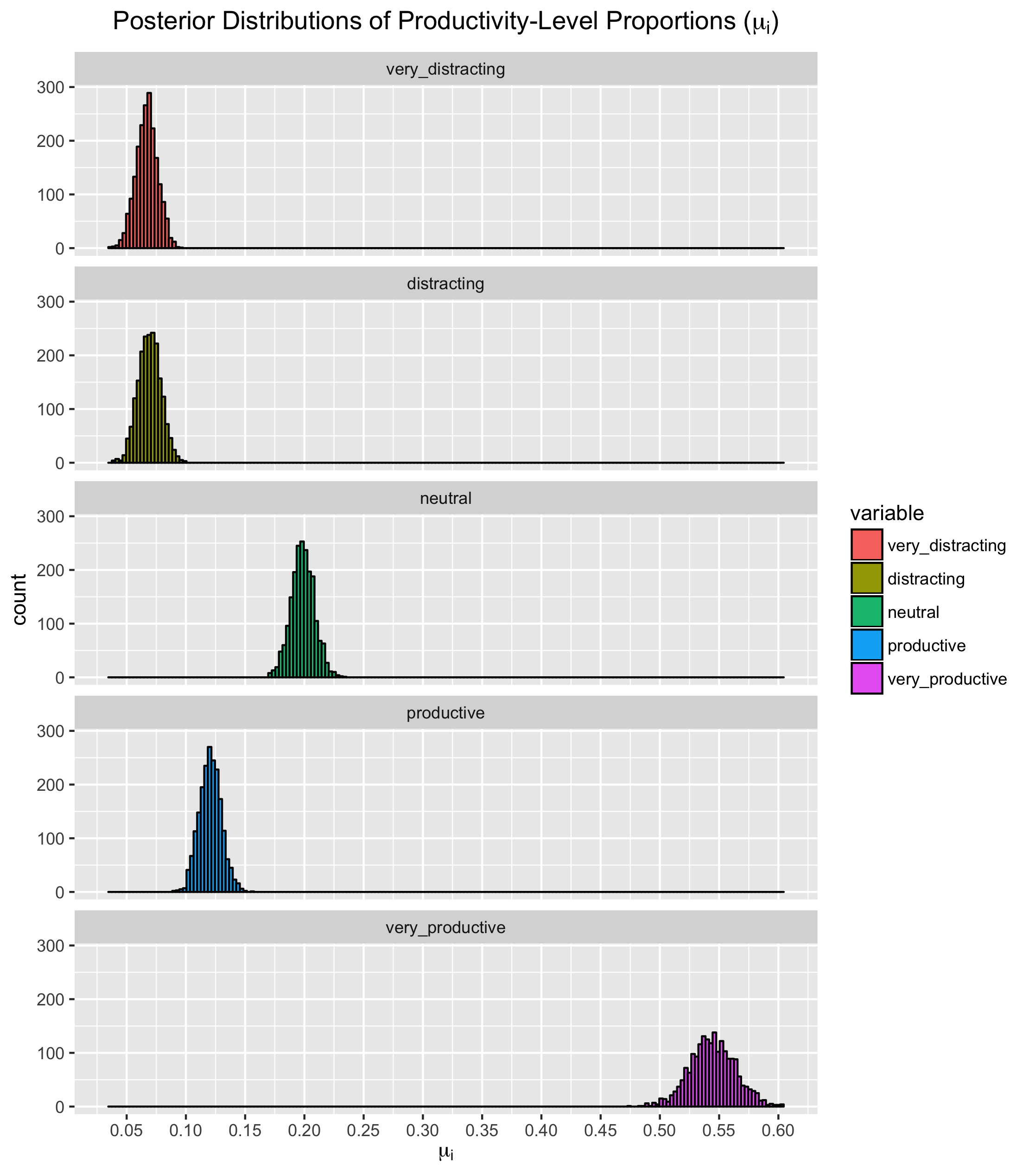 Remember, the above posterior distributions are for the expected values (mean) of each productivity-level proportion. In our model, we then insert this mean into a normal distribution (the likelihood function) with standard deviation \(\sigma\) and draw our final value.

Finally, let's compute the mean of each posterior for a final result: 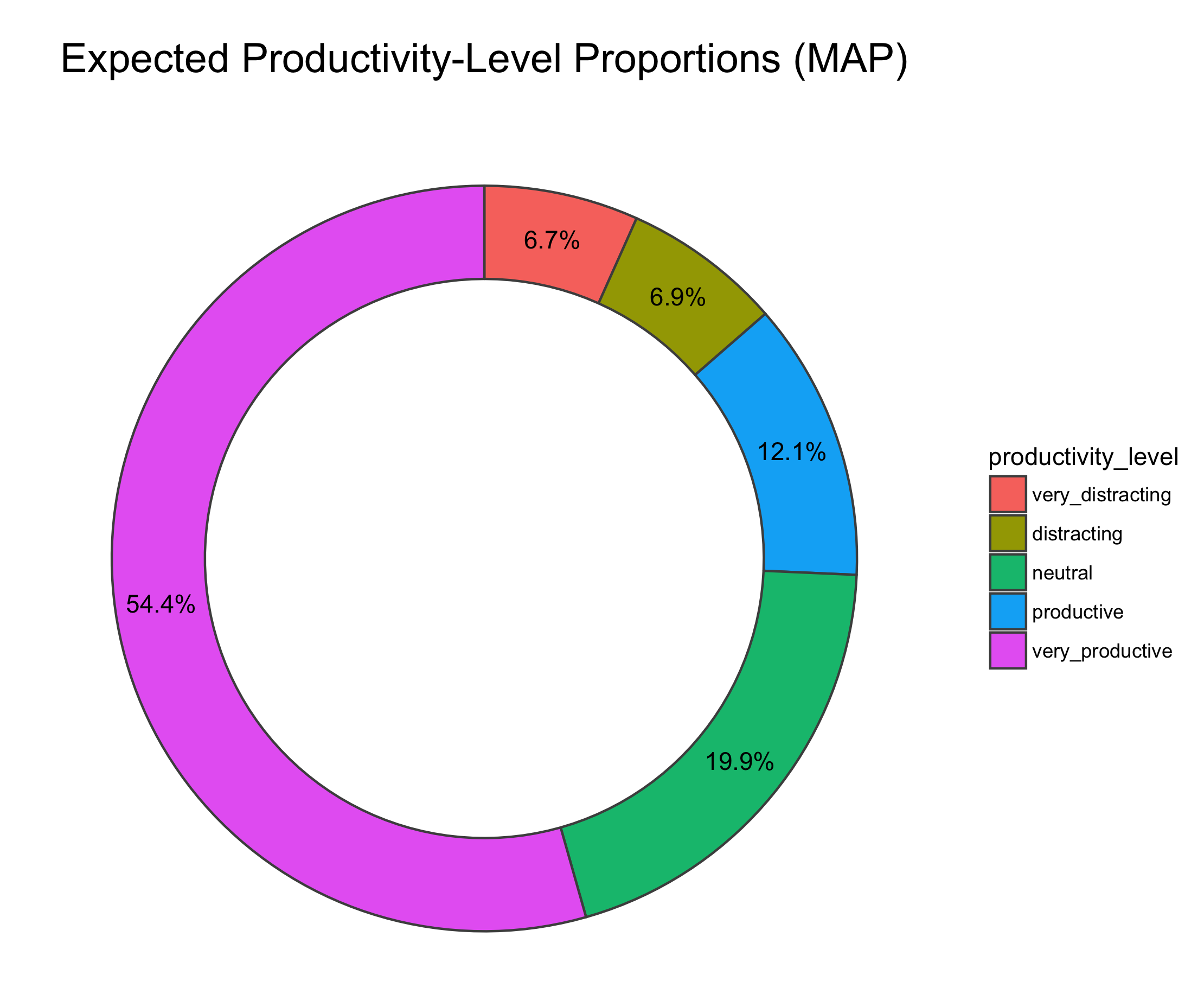 In summary, I've got work to do. Time to cast off those "Neutral" clothes and toss it to the purple.